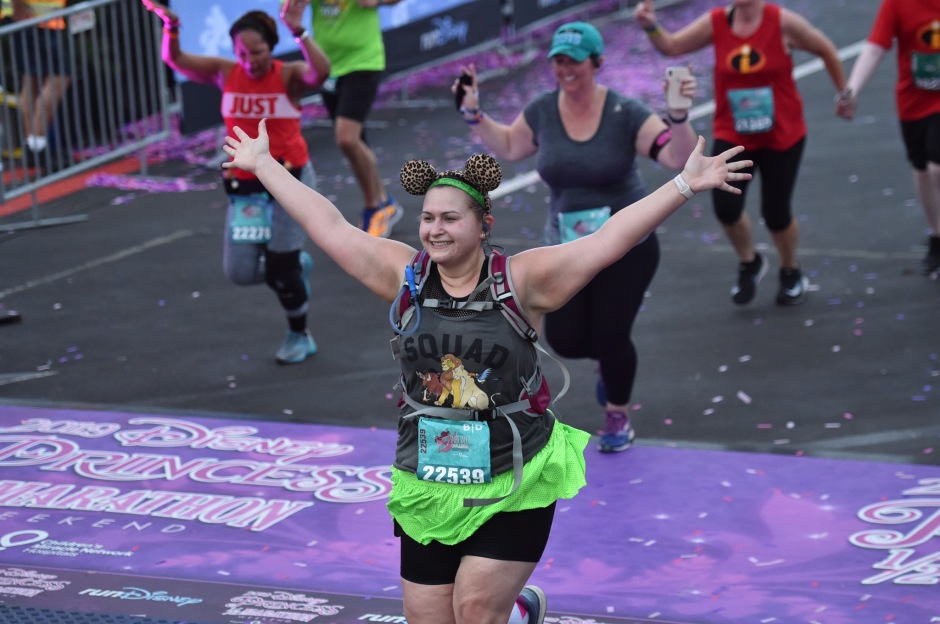 In summary: this was one of the most physically challenging weekends of my life

Last summer, we were planning a Caribbean Cruise that was leaving out of Orlando. Having never been to DisneyWorld, we chose to start the trip a few days early to visit the Happiest Place on Earth. Luck would have it, a few days later the dates for the Disney Princess Half Marathon Weekend were announced and it fell on the same weekend as our visit. Being a runner, I knew I wouldn’t be able to pass up the opportunity to participate. Though I had intended to just do the half marathon, once registration opened, I got super eager and over zealous and clicked on the Fairy Tale Challenge option instead.

The Fairy Tale Challenge is two races; a 10K one day and a half marathon the next. “Hey, no problem,” I thought. I wish I knew how I was going to feel the few weeks prior to race weekend. The closer it got, the more anxiety I felt. I knew I could accomplish one race, but two? What in the actual fork was I thinking? Nonetheless, I had every intention of beasting through four DisneyWorld parks in two days – making the best of my first time there.

We conquered Animal Kingdom and Hollywood Studios the first day, but already my feet were in excruciating pain and swollen. I tried to distract myself from thoughts of wanting to drop out of the race with churros and other Disney goodies, but much to my displeasure, DW doesn’t have churro carts at every corner like Disneyland does.

Living in a much smaller race community, I can show up to the starting line 10 minutes before the start time and find a perfect corral spot, a port of potty and a space to stretch. Apparently at DisneyWorld races, if you’re not in the parking lot two hours before the firework start, you’re not getting in. In the days leading up to the races, I had numerous internal debates about taking an Uber (what if there weren’t any?!) or driving the rental car (what if someone needs to go somewhere at 6 a.m. before I’m done?!). I was still debating this hours before the first race (10K) and thus I got no more than four hours of sleep the night before. Given I was also in a totally different time zone, the lack of sleep meant I awoke with enough butterflies to fill the Animal Kingdom. Ultimately I chose to drive myself at 3:30 a.m.

Half dressed and following a fight with my hydration backpack in which I lost, I sleep-walked to the car and made my way to the Epcot parking lot. The closer I got, the more I anticipated rows and rows of vehicles to be in my way. Next thing I know, I’m in a spot only a few spaces from the race grounds. Was I too early? Better safe than sorry. I spent the next hour in the car, trying to stomach my usual pre-race sprouted bread, peanut butter and banana along with some Nuun Energy. Its rare for me to not finish a meal and as such, I knew I was in rare form.

With about 45 minutes to first corral release, I made my way to my starting spot. The battle with my hydration backpack continued and it wasn’t long before I discovered that the entire thing leaked out everywhere, leaving me with very little water for the course. I knew there’d be plenty of aid stations for both races, but I’m also used to running in very dry climate so I wanted to be prepared for the humidity in every way that I could be. As they started walking my corral closer to the starting line, I saw a b-line for the restroom and decided to go one more time out of nerves (and my pre-workout kicking in). Why is this part important? Well, because I’d like to apologize to the woman who opened what I thought was my locked porta potty door. Maybe that happened because we both needed a pre-race laugh, not horror.

For both races, it took about two miles before my breathing fully acclimated to the humidity. That was quite possibly one of the toughest parts of the whole weekend. If I decide to do another Florida race, I’m training on a treadmill in a sauna.

For the 10K, I told myself I’d do a lot of walking so that I wasn’t completely spent for the next day. But I couldn’t help it. Running is my calling and I was running in freaking DisneyWorld. I reached the center of Epcot right as the sun was rising. It was my first time ever being in Epcot and I couldn’t have seen it for the first time in a better fashion. Epcot recreated famous landmarks from all around the world so I was literally running across the globe with a glorious sight in tow.

I ended up finishing the 10K in just over an hour; I grabbed my snack box and raced home to prepare for another day of theme parking. I couldn’t wait to go back to Epcot and get a closer look at all the landmarks (and eat some food from around the world). My feet were still throbbing and standing in long lines didn’t help, but I kept reminding myself of where I was and did my best to enjoy every moment (even if it meant standing in lines for 1-2 hours at a time; the Frozen ride was SO worth it).

Luckily that night I was able to get some sleep and I felt a little less stressed about the pre-race situation. The half marathon was a little bit busier traffic-wise and I had no idea that you actually walk a mile to the starting line once you’re in the race area (someone needs to do something about that… or give us an extra medal for getting that far).

I started the half with so much doubt. I pictured myself catching one of the busses to the finish. Before I even reached the 5K mark, I had to start walking because my body was tired and sore. I just wanted a shower and food and a nap. But my heart knew I was better than that and soon my mind was wandering with all my typical mantras; I pictured later that day when I’d be on a cruise ship. I gave myself point to point goals. I started brainstorming for my blog and coordinating Instagram post (none of those thoughts will make it here because quite honestly I was full of delirium). I didn’t stop for any of the characters on the course because the lines were long and I just wanted to finish, but they were welcomed distractions. By mile seven, as I was leaving the part of the course that goes through the Magic Kingdom, I finally felt like I was going to make it. The negative thoughts finally turned positive. I struggled to the end but I did it – and in less than three hours nonetheless.

I’ve run two marathons. I’ve run multiple half marathons. I’ve done relay races. I crosstrain with some of the most skilled fitness coaches in my city. But none of that compares to how physically and emotionally challenging this race weekend was for me. But I am a better athlete and person for what I’ve accomplished and I’ll forever be full of pride for not quitting.