Hey you! Remember me? I’m the girl who wanted to blog about her marathon training and have alas made it this far, only to fail. But I guess its better to fail at the writing than the running.

There are fifteen days until my first marathon. I’m already starting to feel a post-race depression kick in. I feel it every time I work out. I feel it while I taper. What do you mean I only have to run EIGHT miles this weekend?! Ooh-wee, I’m leaving the vaseline and the GU at home, papa.

Two weeks ago, I finally hit the point where I knew I was ready. I ran 20 miles – the only thing that scared me more than the actual run. That day was phenomenal. The sun was out. My Honey Badger pre-workout did it’s justice and turned me into an unusual 6 a.m. chatterbox. (Seriously… do NOT try and talk to me in the morning). I had my traditional night-before sushi coma that was more delicious than ever. I slept well. My body felt great with no injury in sight. Everything went just as it was supposed to.

When training started, I vowed that each long run would be met with a new product test. This time, we worked really hard at the whole eating thing. I have never craved nor savored a bagel more than I did at mile nine (and I’m a Jew, so that says something). I was let in on a *spudworthy* secret at mile 12 and at the end, I devoured a hamburger, fries, three beers and two shots of whisky that numbed any cramp or pain that came my way. So, when a runner tells you they “run to eat,” it seriously is so very true.

After a two mile incline in the super hot sun, my running gal pal told me I should give myself a “whoop whoop” at the top. What came out of my mouth and what she actually heard resulted in my new mating call, my new holler and what you should yell at me any chance you get (like from the cheering sections on race day): “Jew Whoop!” While that’s not what I said, it’s fitting and Ann had every right to think I would come up with something so clever. 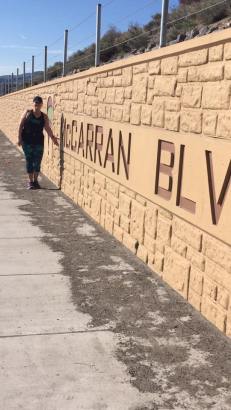 As I sprint around some of the memories from that day, the one that keeps crossing my mind the most is the thought of being ready and how I felt it most in the last three miles. Truly, it’s because of the people I had with me that day. The ones who texted me every few miles to check-in, the ones who surprised me with a group Facebook follow, the ones who pulled over in the middle of the street to honk at me, and most importantly, the ones who ran with me. I have never felt luckier in life than I have since training began.

But also knowing that I’ve worked my ass off these last six months has left me with such a feeling of completion, even though I haven’t officially ran the race yet. I’ve remained committed. I haven’t quit. I’ve dedicated early mornings, late nights and weekends to accomplishing something I never dreamed I would do. Something I told everyone I would NEVER do. Something I am, now, GOING to do.

Fifteen days separates me. Each day I get a little more nervous, but each day I recall that feeling of being ready because I AM ready.